This government is surviving on fudged statistics. Its a well know fact that police try and settle cases without even registering them . This gives the state a clean and safe record. we know the reality is a different picture

From crimes against women to those committed against children and senior citizens, from cyber offences to robberies, rapes and murders, Goa has recorded a decline in cases across different offences, according to the National Crime Records Bureau’s (NCRB) 2016 data released on Thursday.

The state has emerged among the safest in the country. It ranked a low 28th nationally for the low number of crimes in the state in 2016 as compared to other states and Union territories. 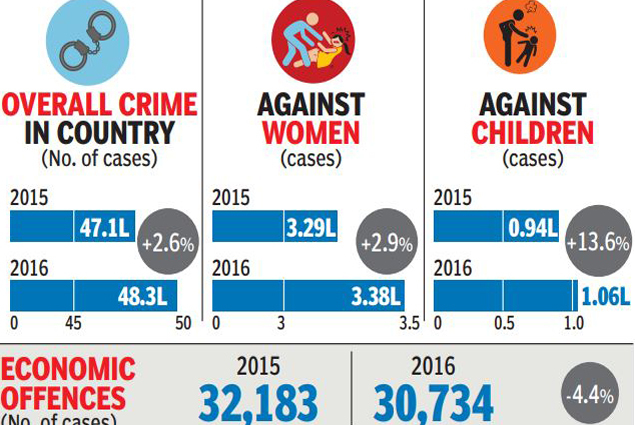 The violations of IPC reported in Goa dropped from 4,466 in 2014 to 2,692 in 2016. Goa emerged safer compared to even other smaller states like Tripura, which have nearly twice Goa’s population, but had registered more crimes. Sikkim, Arunachal Pradesh, Andaman & Nicobar Islands, Lakshadweep were the only states more peaceful than Goa.

As a state, the percentage share Goa contributed to the total crimes reported in the country remained steady since 2014 at 0.1%. But the figures showed improvement over the previous two years. For instance, 43 crimes were committed against senior citizens in Goa in 2016, down from 73 in 2014. Crimes against children declined from 330 in 2014 to 230 last year. Crimes reported by women dropped sharply from 508 in 2014 to 371 in 2016.

The state remained peaceful with not a single case of disturbing public tranquility like communal, sectarian, industrial or student rioting reported in 2016.

Though Goa saw fewer violent crimes, the state saw reporting of thefts, burglaries, cheating and other frauds. In 2016, 2,295 people fell victim to offences related to property.

And though 60 people were booked under Narcotic Drugs & Psychotropic Substances Act, 1985, Goa was far behind states like Punjab, Himachal Pradesh, Kerala and Maharashtra when it came to cases reported involving drugs.

Goa, in fact, saw a much higher number of 799 for violation of the Gambling Act.